How to Clean a Washing Machine the RIGHT way - No More...

Nilfisk Pressure Washer Review: C110, C120, C130, C140 & D140 Xtra Compared
How to Clean Shower Head: Descale Quickly and Easily
How to Clean Bathroom Tiles: A Complete Guide
The Major Causes Of Condensation And Mould And How To Properly Deal With Them
Holiday Let Cleaning: Tips for Efficient Cleans Between Bookings

I find it quite ironic that a machine designed to wash clothes can get so dirty. I’m talking about a washing machine and the fact that no matter what I do I always end up with black mould-like substances and slime in different parts of the machine. If you have the same problem then read on and find out the best ways to clean a mouldy washing machine door seal and dispenser drawer, plus some tips on hopefully preventing it from ever coming back!

Step-by-Step Guide: How to Clean a Mouldy Washing Machine Drawer

Before we get onto cleaning the mould away, it’s probably worth just understanding exactly what the mould is and where it comes from. When deep cleaning your machine you are likely to come across two types of mould:

Black mould can release spores but as the spores are usually damp then this will not be so much of a problem in a washing machine. Black mould is also known to cause respiratory problems if inhaled, such as sneezing or coughing. Don’t panic though, the risk of serious ill-health from the mould in the washing machine is low but care should be taken if you are scrubbing the mould of the machine, just in case.

You may also have noticed a damp or unpleasant smell coming from the machine. The black mould is a likely cause as it can build up and give off a pungent smell. This may not necessarily be the case though as other causes of washing machine smells including:

What causes a mouldy washing machine drawer or door seal?

So where does this mould actually come from? Mould and bacteria need water and a food source which unfortunately includes modern-day laundry detergents and softeners. This is because, to prevent “bleaching” of coloured clothes, many laundry detergents, especially the ones intended to protect colours, contain no bleach that would normally kill the bacteria. They instead act as food for the bacteria to grow. Liquid detergents and softeners have no bleach in them so these are the “worst case scenario”.

We also use colder wash temperatures these days (I usually use between 30-40 degrees) as these are usually more energy efficient. However, the temperature of this water isn’t hot enough to remove the mould. Typically, you will need a wash above 60 degrees (90 degrees is often recommended. So, the worst-case scenario for creating mould build up is to use liquid detergents on low wash temperatures…and that’s pretty much what a lot of people use these days!

When it comes to mould in the dispenser drawer then the most likely cause is the use of fabric softener and the cold-water inlet feed. However, a cause that cannot be overlooked is a slow-to-close water inlet valve dripping water into the drawer. This is probably not a DIY repair though and will need a specialist to fix it. You should be able to see if it’s leaking by opening the drawer shortly after the wash has finished and checking for any water droplets from the inlet feed point.

The problem with mould though is that it will continue to grow if you do nothing to remove it. So, what are your options?

How do you do this for the door seal?

When it comes to cleaning the door seal, it’s a fairly similar process to the dispenser drawer. Don’t try to remove the door seal though, instead, you’re going to have to clean the door seal in place. You may see some mould on the visible parts of the rubber seal, but you will also have to pull back the seal to have a look behind. Don’t be too horrified by what you might find!

For cleaning, its best to use a larger cloth to do this. Have a bowl of hot soapy water nearby so that you can soak and rinse the cloth. As with the drawer, it’s also worthwhile using an old toothbrush to get into the more difficult to reach areas between the seal and the drum body.

You will also find there are plenty of mould removal sprays that will make your job (a bit) easier, the main ones to look at are Cillit Bang Power Clean Black Mould Remover or Dettol Mould & Mildew Remover, although many supermarkets will also have their own branded mould spray.

There are also products available that are specifically designed for cleaning the washing machine. These include: 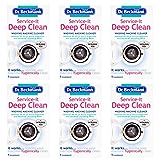 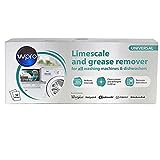 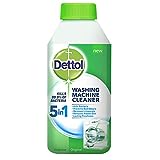 To give the door seal a decent deep clean you could put some soda crystals into the machine drum and run on a hot wash. I’ve not tried this myself but it seems to work for a lot of people and it’s worth giving a try if at least to save on the cost of the branded machine cleaners.

Can the mould be prevented?

Once you have cleaned the mould away you don’t want all that hard work to go to waste (mould can grow back even on a new machine with a few months). To prevent the mould from building up, leave the dispenser drawer partially opened when the machine cycle has finished allowing the drawer to dry out and air to circulate.

For the door seal, the bacteria grow because water gets trapped between the seal and door (as it’s meant to). So, one preventative measure is to leave the door slightly open after your washing has finished or, alternatively, quickly dry around the washing machine door seal, although this still may not prevent the mould from growing.

If you are using regular low heat washes (say 30-40 degrees) and liquid detergent (or powder detergent without bleach for that matter) then to prevent mould build up, you will need to carry out maintenance cleaning washes on your machine. This should be at a wash that is 60 degrees or above (90 degrees is better) and if you can, use a powder detergent with bleach in this wash. It’s sometimes easier to do this “service” wash along with your normal (light coloured) bedding or towel wash. Always check the washing instructions first though. When you have finished open the drawer and door to allow the air to circulate.

As well as carrying out the service wash there are a number of other things you could do, including:

In fact, if you wanted to carry out the ultimate washing machine maintenance schedule that would prevent mould build up and smells, you could try the following steps on a monthly basis.

Hopefully, the above tips will help you clean your mouldy washing machine dispenser drawer and door seal. Always remember to check the washing machine manufacturer’s instructions before carrying out any maintenance on your machine.

If you have any tips that have worked for you, please leave a comment below.