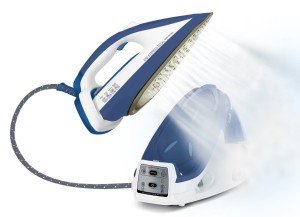 If your are considering a Tefal steam generator iron then you have plenty of models to choose from. However, this can be both confusing and time consuming to research.

In this product review guide we have selected the best selling Tefal steam generator irons and provided a short review summary and feature comparison of these most popular models.

What is a steam generator iron?

Surely all irons generate steam so what is so different about “steam generator” irons? The fundamental difference is that steam generator irons have a separate water boiler unit to produce the steam which is then forced through the iron’s soleplate under pressure. As this steam pressure is constant, then it becomes much easier and quicker to iron your clothes.

The other main difference is price. Whereas a conventional steam iron retails for less than £20, the Tefal steam generator irons featured here retail for between £150 and £250.

What to look for when buying a steam generator iron

These are the common features and specifications worth checking when considering a steam generator iron:

Steam pressure is measured in bars and the higher the number, the deeper the steam can penetrate into the fabric. Steam output is measured in grams per minute (g/min) and again, a higher figure is better

As well as operating at a constant steam output (grams per minute), some Tefal models also have a steam shot function for an extra steam burst that is typically more than double the standard output. 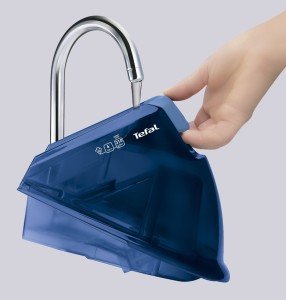 Tefal irons generally have water tanks between 1.7 and 1.8 litres. Tefal claim that this should last for about 2 hours of ironing. Most models also allow you to fill up the water tank without shutting off the iron.

This is a built in safety feature that will turn the iron off automatically if it’s left unused or laid on its side or soleplate for too long.

if using your iron in a hard water area then limescale deposits can build up on the iron (similar to what happens to a kettle). This can reduce the life of the iron so most Tefal models feature an “anti calc” feature that collect the scale reside on a “spoon” which can easily be removed and cleaned.

Some Tefal models feature a variable steam feature that allows you to set the steam output for the type of fabric your are ironing. Other models have preset settings for different fabrics such as jeans, normal or delicate.

Finally price; this can vary by as much as £100 plus between models. Generally the greater the steam output and pressure, the more you will pay. Extra features also start to increase the price.

There are a couple of problems usually reported. The first, which is common with most steam generator irons is the size of the units – you need either the worktop space or have a large ironing board. The second issue is water leaking from the iron instead of steam. Although not a common problem is can still be frustrating as it can make items damp. 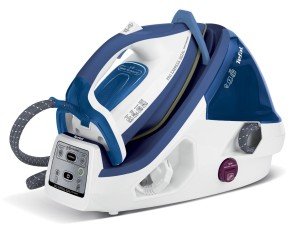 The GV8930 is one of the best selling Tefal steam generator irons and generally retails from around £185. This particular iron has a powerful steam output with 6 bar pressure compared to between 5 and 5.5 bar on the other models. Continuous steam output is 120 g/min which is the same as the other models reviewed but the steam shot output is an impressive 310 g/min.

The GV8930 has three different steam settings rather than variable control on the base unit. This can make it easier, as depending on what type of fabric you are using (settings are for jeans, normal and delicate), you can set the iron to the correct steam level. This will not only prevent you from damaging your clothing during ironing but ensures you have the optimum setting rather than having to experiment and test.

This model has a large 1.8 litre water tank that allows for around two hours of ironing between fill ups (which can be done when the iron is still switched on). The soleplate on the GV8930 is ceramic and has a self clean function; any fibres stuck to the surface are simply “burnt” off. As with the majority of Tefal steam generator irons, this model also features the anti-calc system making it suitable for use in hard water areas without reducing the life of the iron.

Its easy to see why this is a best seller: it’s reasonably priced, has high steam pressure and output and has some thoughtful features to make ironing easier and prolong the life of your investment. Some people may prefer a variable steam function, although for others, the simple settings on the GV8930 may be welcomed. 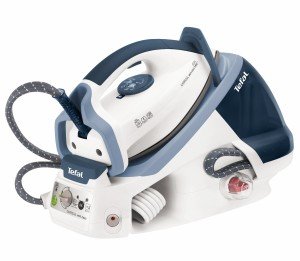 The GV7450 is also a very popular Tefal iron and is usually around £20 cheaper than the GV8930 reviewed above. However for this price saving you do have to sacrifice some features and performance.

The steam pressure on this model is 5 bar, which is around 17% less than on the GV8930. Continuous steam output is the same at 120 g/min but there is no higher output steam shot function on this model.

The water tank has a 1.7 litre capacity, smaller than some other models but you’ll hardly notice the difference. The GV7450 also does without the automatic shutdown feature, not a necessity but it certainly gives you piece of mind and in our opinion a feature worth having.

This model has a variable steam control on the base unit, allowing you to select the right steam output for each fabric type. There is usually a bit of trial and error involved here but a least you have full control over the settings. An anti-calc system is built into this iron but it does without the self-cleaning soleplate found on the GV8930.

On its own this is well-specced steam generator iron at a reasonable price. However, it’s overshadowed by the only slightly more expensive GV8930. 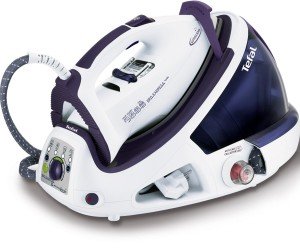 This model is the highest priced in our review, usually retailing for around £260, which is considerably more than the other two models featured (although the GV8930 has an RRP of £250).

The GV8431 is a good alternative to the GV8930 if you are looking for a steam generator iron with variable steam control. Other that that, both in terms of look and spec, both models are quite similar.

In terms of features, the GV8431 also has Tefal’s anti-calc system, self cleaning ceramic soleplate and auto shut-off feature (all included on the GV8930).

Its hard to recommend the GV8431 over the lower priced GV8930, however this is still a great steam generator iron and maybe the ideal choice if you want high performance, a long list of features and variable steam control.

Not yet decided? Have a look at our Steam Generator Irons Buying Guide.